Must-see scenery along the Jurassic Coast

If you’re lucky enough to have a holiday home around South Devon or Dorset, there’s natural beauty in every direction. But the jewel in the region’s crown has got to be the Jurassic Coast.

This gigantic expanse of rock formations, fossils, and stunning scenery is a sight to behold — one that many Willerby holiday homeowners get to enjoy up close.

Not sure where to start? In this article, we’ll explore the very best of the Jurassic Coast. But first, some stunning Jurassifacts to amaze your friends back home.

Facts about the Jurassic Coast 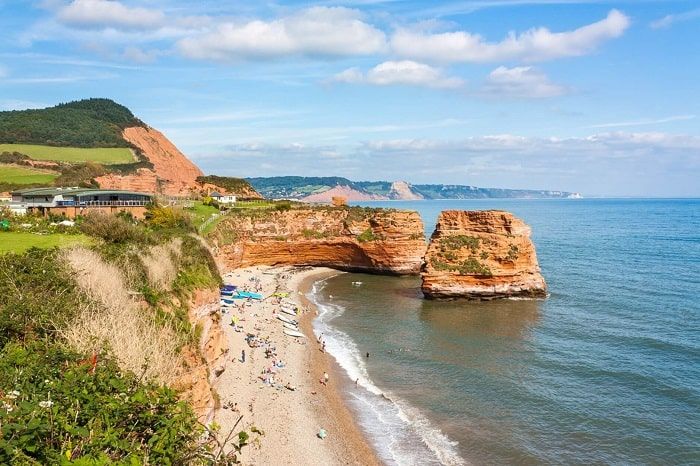 Close to the western end of the Jurassic coast sits Ladram Bay, between Budleigh Salterton and Sidmouth. It’s a remote-ish spot, although there is a Willerby-recommended holiday park there.

Bright red sandstone cliffs and sea stacks with clearly defined strata make it a spectacular seaside scene, and show that the geology dates back to when the area was a desert. Today the pebble beach is popular among swimmers and water sport enthusiasts.

On Christmas 1839, fifty acres of prime East Devon farmland suddenly collapsed onto the beach below, creating a chasm of broken land along the coast. This was the Great Bindon landslip, and it started what is now the Undercliffs Reserve: seven astonishing miles of Jurassic Coast from Axmouth to Lyme Regis.

The area was left to overgrow, resulting in a sheltered woodland wilderness with its own microclimate — described as the closest thing you’ll get to a rainforest in the UK.

Today it’s part of the South West Coast path, a challenging, scrambly walk. It’s worthwhile, though, because you’ll find a paradise of ferns, fungi, wild clematis and orchids beneath a canopy of ash and maple. It’s home to ravens, peregrine falcons and owls, as well as grass snakes, lizards and great crested newts.

Travel a mile and a half east past Lyme Regis, and you’re in the unspoilt village of Charmouth, where cottages are thatched, beach huts are blue, and fossils are abundant.

You’re just as likely to pick up an ammonite on the shingly beach here as in Lyme, especially if you join one of the guided fossil hunting strolls along the shoreline. There’s a good choice of pubs, cafés, and shops for such a small place, too. 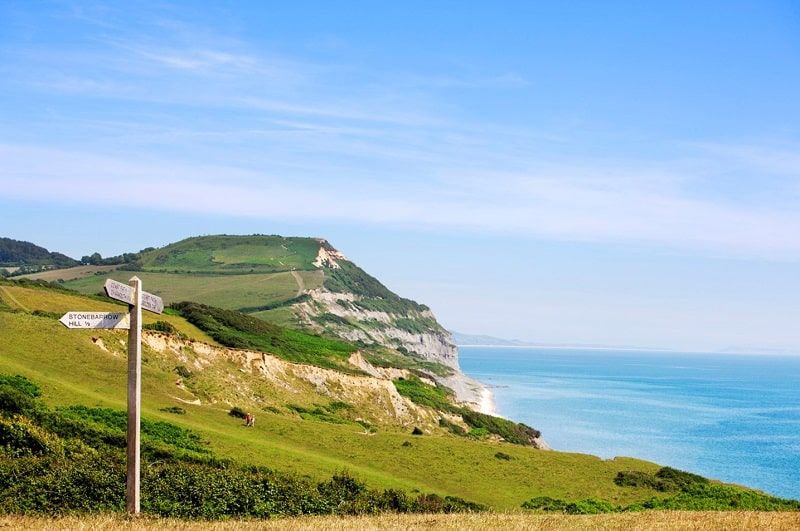 Fancy a climb? Head east from Charmouth, and the yellow cliffs that give Golden Cap its name are the highest point on the entire south coast. The National Trust-owned estate is an all-year-round delight of hidden valleys and rolling fields, so it’s worth taking your camera along for the ascent.

In spring, bluebells carpet the wildflower meadows, while later in the year, wild orchids appear. Butterflies and bees abound in summer, and you’ll always find birdsong above. No wonder both George Clark and Julia Bradbury have featured Golden Cap in their TV walking tours.

It would be a crime to miss West Bay, better-known as Broadchurch, where ITV filmed three series of the hit drama.

The real West Bay is an ancient fishing village just to the south of Bridport. Stand on East Beach and admire the golden sandstone cliffs looming 50 metres above you. Turn to the sea on a clear day, and you’re rewarded with breath-taking views of Chesil Beach and Portland Bill. 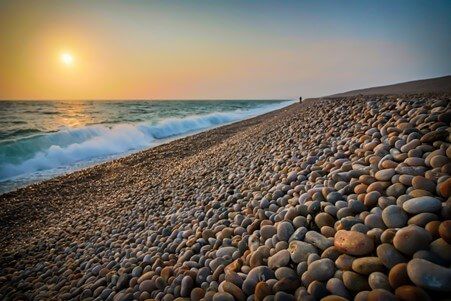 High on your list of things to do in Dorset should be a visit to the 18 miles of Jurassic coast from West Bay to Portland. This is the rugged and often bleak stretch of pebbles known as Chesil Beach, described by John Fowles in The French Lieutenant’s Woman as “an elemental place, made of sea, shingle and sky”.

One of the strangest Chesil Beach phenomena is how pebbles change gradually, from potato-sized near Portland to pea-sized by West Bay. Legend has it that smugglers landing on the beach at night could just grab a handful of shingle and know precisely where they were.

Between the shingle and the shore is one of the world’s few undisturbed saltwater lagoons — the Flee, a mecca for anglers. It’s also a Site of Special Scientific Interest and a fabulous location for spotting rare wild birds, including little egrets, dark-bellied brent geese, and common greenshanks.

You can’t get further south on the Jurassic coast than the tip of Portland Bill. It’s a narrow peninsula jutting out to sea at the eastern end of Chesil Beach, and the famous lighthouse (the third, built in 1906) is there for excellent reasons.

Stand beneath the lighthouse on a typical day, and you’ll get a powerful sense of why the Portland sea area gets mentioned in gale warnings on the BBC so often. And the wind isn’t the worst of it: the treacherous seas around Portland Bill include shallow reefs, the Shambles sandbank and a strong current known as the Portland tidal race. No wonder this stretch of coast was traditionally famous for shipwrecks. 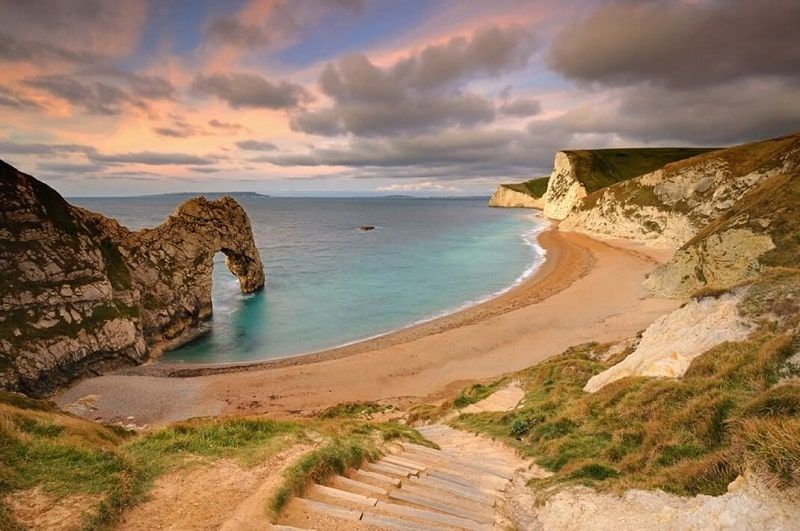 Perhaps the Jurassic coast’s most famous single feature is the magnificent limestone arch over the sea known as Durdle Door, the natural result of erosion over millions of years. It hit the headlines in summer 2020 when thousands of day-trippers suddenly forgot about the pandemic and descended on the tiny cove one warm weekend.

The sand and shingle beach (in front of the iconic arch) is only accessible via steep steps from the cliffs above. And that’s where you’ll also find perhaps Dorset’s most superbly located holiday park.

Lulworth Cove and the Fossil Forest

Next door to Durdle Door is another globally famous Jurassic Coast landmark. Lulworth Cove is a perfect horseshoe bay that continually draws in school and college field trips. That’s because it features one of the world’s most spectacular concentrations of geological marvels, including rock folds, faults and examples of erosion. On the army ranges above Lulworth Cove (which means it’s only accessible at certain times), you’ll also find a stunning collection of petrified tree stumps known as the Fossil Forest. 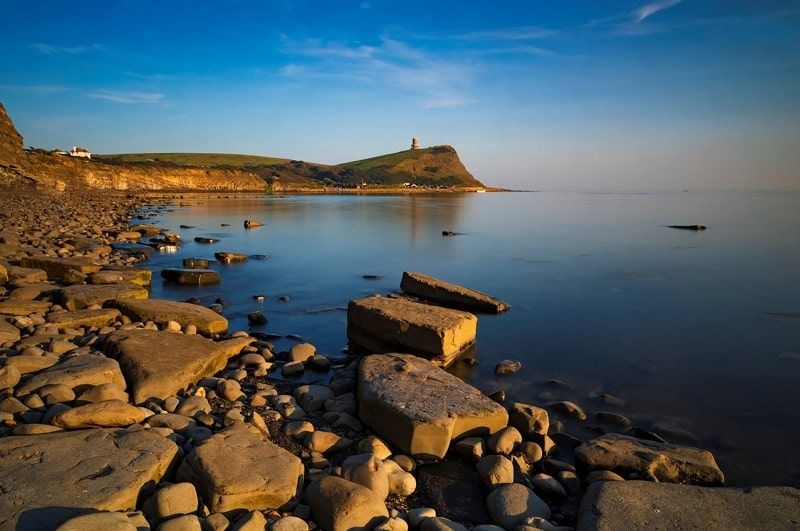 The Jurassic Coast is best known for the remains of long-dead creatures in fossilised form, but the emphasis switches to the living at Kimmeridge Bay. It sits within a marine Special Area of Conservation and is said to have the best rock pooling and safest snorkelling in Dorset.

The Wild Seas Centre (free entry) is right next to the slipway. It contains a small aquarium and inspires children of all ages to explore the bay’s profusion of ledges and rockpools, alive with tiny sea creatures.

Above the bay is a folly known as the Clavell Tower, immortalised in books by Enid Blyton and PD James. Climb the tower and rewarded yourself with spectacular views over the Bay.

At the most easterly point of the Jurassic coast, on the peninsula known as the Isle of Purbeck, is Handfast Point. Look out into Studland Bay there, and you’ll see a set of chalk sea stacks. They are Old Harry Rocks. According to legend, the Old Harry in question is either a notorious Poole pirate, Harry Paye, or someone even more wicked: the devil himself.

Need a rest? No wonder. You’ve just traversed the entire 95 miles of the Jurassic Coast from west to east! So, why not have a breather and check out the wealth of Willerby-recommended holiday parks in Devon and Dorset here?