The 11 Best Places to Visit in Norfolk

Famed for its historic market towns, pristine marshes and seemingly endless stretches of sand, there’s so much to love about Norfolk. It’s one of England’s few corners where you’ll find a slower, more relaxed pace of life, making it a firm favourite among holidaymakers.

We’re passionate about this part of the world at Willerby, which is why you’ll find many of our park homes and bespoke lodges scattered across the region. So, if you’re toying with the idea of securing a second base in Norfolk, here’s a taste of what’s to come.

Where is Norfolk?
Norfolk makes up a large chunk of a region known as East Anglia. Situated along the east coast of Southern England, it’s an area renowned for its flat land and grassy marshes — a haven for birdlife. Norfolk’s county town Norwich has quintessentially English appeal, while the natural landscapes that make up this rural region are unlike anywhere else in the UK.

Human history in the area dates back millennia, but it’s the Angles who shaped Norfolk as we know it. Arriving from present-day Germany and Denmark, they formed the independent Kingdom of East Anglia in the 6th century before joining the Kingdom of England in 918.

In the 17th century, Dutch-inspired drainage systems and river diversions transformed many of the region’s tidal wetlands into fertile land for crop growing. While in more recent history, the county played its part during the Second World War, with its flat topography and proximity to the continent making Norfolk ideal for Allied airfields. 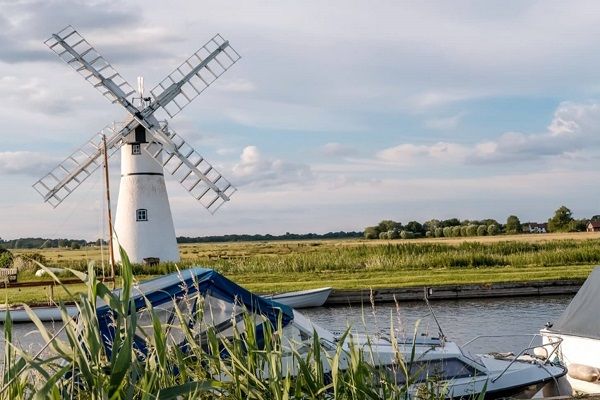 Spanning more than 200 kilometres of lock-free canals, rivers and lakes, the Norfolk Broads are a vast network of waterways at the heart of the county. Perfect for boat trips and adding even more appeal to the quaint villages in their surrounds, the Broads are home to over a quarter of the rarest flora and fauna in the UK.

Sheringham
If you’re looking to step into history when you visit Norfolk, Sheringham is tough to beat. This charming seaside town boasts a proud heritage of fishing and crabbing – something which remains evident today. Along with its beautiful beach, heritage steam railway, and abundance of tea rooms, Sheringham offers plenty to keep guests of all ages smiling.

Towering above the city of Norwich for almost 900 years, Norwich Cathedral is among Britain’s best-loved historical buildings. The Romanesque style marvel is a must for any architecture lovers, boasting the second tallest spire and largest cloister in all of England.

Plantation Garden
At the heart of historic Norwich, Plantation Garden feels a world away from the hustle and bustle of the city. This three-acre listed garden occupies an old chalk quarry and features gothic fountains, lush lawns, woodland walkways, a Victorian-style greenhouse, and an Italianate terrace.

You’ll find this National Trust site and Area of Outstanding Natural Beauty on the county’s northern tip. A four-mile stretch of shingle forms a natural harbour and surrounding salt marshes, which are essential breeding grounds for seabirds and seals. Take a boat trip from the nearby Morston Quay for the best chance of spotting wildlife.

Houghton Hall and Gardens
One of England’s most celebrated stately homes, Houghton Hall and its surrounding estate was built in the 1720s for Britain’s first Prime Minister, Sir Robert Walpole. Today, visitors are invited to tour parts of the hall’s lavish interior, view its superb collection of contemporary sculptures, and stroll around its walled gardens.

Royal Sandringham
Among the most famous houses in all the UK, Sandringham is the much-loved country retreat of the Royal Family. So naturally, parts of the property are often off-limits. But guests are still invited to tour much of the 8,000-acre estate, including its woodlands, landscaped gardens and even the ground floor rooms – provided nobody’s home!

Northern Lights
Did you know North Norfolk is one of few places in England where you can see the aurora borealis? It’s true. Thanks to the region’s lack of light pollution, Wiveton Downs and Kelling Heath Holiday Park offer budding stargazers phenomenal views. The area is even awarded Dark Sky Discovery Status! 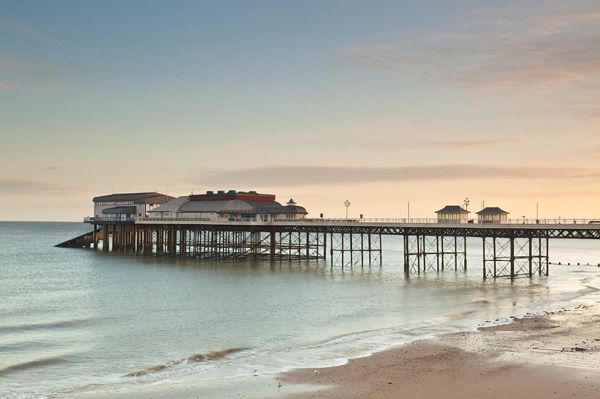 Pleasure piers are a British seaside staple, and one of the best-preserved examples is on Norfolk’s north coast. This Victorian-era jetty has survived storms, boat crashes and damage during the war. Nevertheless, its end-of-pier Pavilion Theatre is still the best place in town to catch a show, while its boardwalk is perfect for capturing a sunset.

Wells-Next-The-Sea
One of the most picturesque Norfolk destinations, a day in the oddly named Wells-Next-The-Sea feels like the perfect escape. From its vast golden sands lined by colourful beach huts to the cosy pubs that sit beside Buttlands Park, there’s plenty to love about this seaside spot.

Famous for its period architecture and quaint cobbled streets, the former seaport of King’s Lynn is bursting with history. Prominent landmarks include The Custom House, Castle Rising and Kings Lynn Minster, but you can also brush up on your local knowledge at True’s Yard Fisherfolk Museum.

If you can’t wait to amble around Norfolk’s coasts and countryside, start by finding your perfect base with the help of our find a park tool. Alternatively, take a tour of our beautiful holiday homes and get a glimpse of what life in Norfolk could look like.